The first bricks have been laid on the first-ever WV Living homes in the City of Wolverhampton. 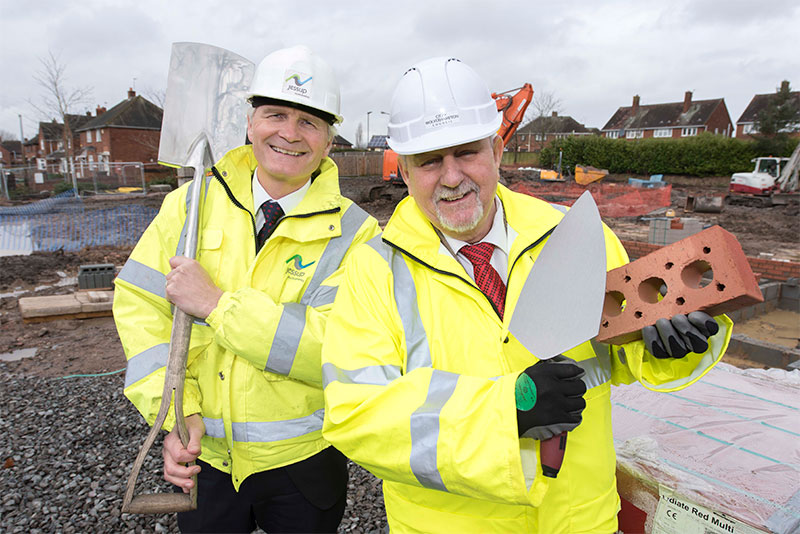 Jessup are building 52 homes, including 13 affordable homes, on the site of the former Danesmore Park Primary School.

The development off Russell Close will be named Danesmore Pastures and will see a collection of two-bedroom, three-bedroom and four-bedroom homes for sale.

The first house is expected to be up by the summer and the first three homes were reserved as part of an early-bird offer at Sunday’s city Housing Fair.

It is part of WV Living’s first phase of delivering more than 1,000 new homes over the next four years, as the council’s own housing company.

Councillor Peter Bilson, Deputy Leader and Cabinet Member for City Assets and Housing, said: “This is a major milestone for WV Living, who are helping to drive house building in the City of Wolverhampton.

“They are providing top quality homes and developments with strong local links that residents can be proud of.

“The range they are offering has been well received by potential buyers, as was highlighted at the recent city Housing Fair.”

Jessup Managing Director, Clive Jessup added: “Jessup are delighted to be building these, modern, energy efficient homes on behalf of WV Living, for the City of Wolverhampton.

“2018 marks our 30th year of business and these homes will be built by our respected local supply chain and skilled trades.”

Work on WV Living homes is also expected to start this spring on the former Ettingshall Primary School site, a plot of land on nearby Sweetbriar Road, and the former Prouds Lane Leisure Centre site, with planning permission in place.

The former Ettingshall Primary School site off Herbert Street will see 25 houses and nine apartments developed on it, with ten affordable homes lined up on Sweetbriar Road.

The names of the new developments have been chosen to reflect connections to the local area.

The former Ettingshall Primary School site will be branded ‘Sweet Briary’, and the Prouds Lane former Leisure Centre site will be called ‘Peascroft’.

The seven types of homes – The Pelham, The Bantock, The Moseley, The Wightwick, The Newbolt, The Hayward and The Leveson – have been named after popular landmarks and famous people associated with the city.

Full information on the homes, the development sites and how to register an interest in viewing or buying, is available on the WV Living website: www.wvliving.co.uk.